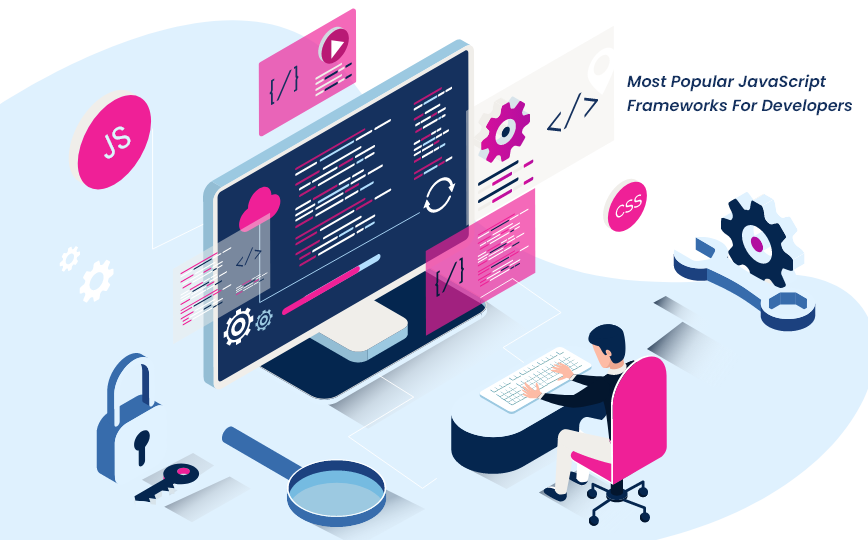 Along with HTML and CSS, JavaScript is one of the most prominent development technologies in the world. The programming language is present in 98% of the world’s websites in one way or the other. The language is JIT, which refers to just-in-time compilation.

JavaScript can be used in development environments like Adobe Acrobat, Apache CouchDB, and Node.js for the backend. The language’s versatility has also taken it to mobile and game development.

It is easy to learn, use and implement. Since it’s immensely popular, you will never run out of support for your project.

They may include code libraries, toolsets, compliers, and support programs to create different components for your project. The usage of JavaScript frameworks will depend on the features that you want in your project, and factors like…

Now that you know how frameworks can aid your development process in JavaScript, here are the most popular JavaScript frameworks for developers in 2022:

Here are the popular JavaScript frameworks.

An MVVM (Model-View-ViewModel) front-end framework, Vue.js is an open-source technology to build single-page applications and user interfaces. It was developed in 2014 by Evan You, and is currently maintained by him and other core members.

The aim of Vue.js is to improve on the frontend technologies like React and Angular. It supports the two-way binding of Angular and the virtual DOM of React, taking advantage of the best of both worlds.

The framework comes with sufficient documentation and it is easy to learn for beginners. For building progressive web applications and single-page applications, it is one of the most popular JavaScript Frameworks.

Examples of companies that use Vue.js:

Trivago uses Vue.js along with Nuxt.js for its Trivago Magazine, which explores hotels around the world to give the best travel experience to its readers. GitLab allows developers to store and manage their projects, and developer collaborations.

GitLab uses Vue because it allows its team to ‘easily write simple JavaScript’, in their own words. Solving complex problems in quick time is also one of the reasons they ended up using Vue.js.

Streaming service Netflix uses Vue.js for some of its internal components, including its cloud data storage utilities.

The open-source framework launched by Google in 2016 is widely used today for both front-end and back-end development. It poses an ideal choice for single-page applications and progressive web applications.

Angular is also called Angular 2+ and is rewritten by the same team behind AngularJs. Angular supports TypeScript, and it can be a challenge for someone to learn with its steeper learning curve compared to React.

With Angular, you can establish real-time synchronization between model and view, it also offers two-way data binding and has built-in dependency injection.

Examples of companies that use Angular:

PayPal, the worldwide online payment network that uses Angular for creating dynamic web pages. This allows them to feed transaction data in real time. The app’s responsiveness, thus, can be attributed to Angular.

Forbes magazine uses it to self-update articles and responsive UI similarly. The fast page loading that comes with Angular is also a bonus.

One of the largest freelancing platforms in the world, Upwork uses Angular for its responsive single-page experience. User profiles and clients are managed with efficiency on these pages.

React.js is by far the most popular front-end and open-source solution. It helps in creating user interfaces with the help of UI components. React.js was developed by Meta and it is also maintained by Meta and the React community.

React is a preferred choice for many to create single-page applications or mobile applications. The framework is easier to learn than its contenders like Angular. There is solid documentation and community support available as well.

As a library developed and maintained by Meta, it is constantly evolving. On the other hand, these short development cycles make it hard for developers to keep up to date with changing features. With that, the documentation is not updated fast enough.

Examples of companies that use React:

The cross-platform abilities of ReactJs come in handy for Airbnb, a firm that offers homestay and lodging in the tourism industry. The app keeps running seamlessly independent of the operating environment on the user’s end.

BBC, the news giant from the UK uses React single page application as it allows them to publish stories in multiple languages and manage high volumes of traffic. From the front page, story page, and articles, to on-demand TV and Radio pages are made with React-based SPA, Simorgh.

Dropbox offers cloud storage services to its users. The firm moved to React for fast reload, small file sizes, and to build a rich user interface.

First released in 2010, Express helps developers build RESTful APIs with Node.js. It is also an open-source software with MIT Licence. This popular JavaScript framework is used for back-end development for web applications.

For development stacks like MEAN and MERN, Express is the back-end technology used. It offers a plethora of features with plugins and still manages to stay minimal.

The RESTful APIs created with Express will help your web application integration with other applications and serve static HTML files. The framework also makes it easy to route and set up middleware packages for your project.

Examples of companies that use Express:

Trustpilot is an online review website with its headquarters in Denmark. With nearly 1 million reviews a month, the company needs the advanced routing mechanisms of Express, which uses many features of Node.js.

Stack, the app that helps its users to choose the right investment opportunities based on their goals, uses the Express framework. The framework’s flexibility and middleware modules that manage extra tasks on response and request also help the firm.

Accenture, the IT consultant giant, also uses the Express framework since it offers JavaScript as a single language for front and back-end development. The codes can also be implemented faster with the Google V8 JavaScript engine.

JQuery is used by 77% of the 10 million most popular websites. It is an open-source library written in JavaScript that uses a permissive MIT license. JQuery simplifies HTML DOM tree manipulation, CSS animation, Ajax, and event handling.

The library was first developed in 2006, which makes it 16 years old. There is a lot of community support available for that reason, and comparatively, it is an easy-to-learn technology.

However, it cannot be compared with frameworks of today that are loaded with advanced features. If you want to build complex applications with JQuery, it will create larger codes that will be hard to maintain. It works best for simple, smaller applications.

Examples of companies that use JQuery:

Google, the largest search engine, has used jQuery in its products multiple times. When the Google code was relaunched, it was jQuery under the hood used for the website.

Twitter developed Bootstrap, an HTML, CSS, and JS-based UI components and interactions framework. jQuery plugins in Bootstrap require the use of the jQuery framework for the company.

The global technology company, IBM, also uses jQuery with its website. The company uses jQuery since it makes it easier to use JavaScript on the website.

For Front-end development, Svelte is quickly becoming the go-to framework for developers. It is a free and open-source front-end compiler that debuted in 2016, created by Rich Harris. It is maintained by him and the other core team members.

Unlike others, it is not a monolithic JS library imported by applications, but it compiles HTML templates to a code that will manipulate the code directly. This helps with reducing file sizes and better performance. It takes care of overhead linked to runtime intermediate representation, unlike virtual DOM.

Examples of companies that use Svelte:

GoDaddy, a Domain and web hosting company, New York Times, a newspaper with a worldwide readership, and 1Password, a digital vault and password manager uses Svelte.

The reason behind this is, Svelte is an extremely fast, and production-ready framework for front-end. The framework beats Angular, React, and Vue.js when it comes to performance. It has zero client dependencies and runs with JavaScript, CSS, and HTML.

« Should You Choose Flutter For Your App Development? Pros And Cons 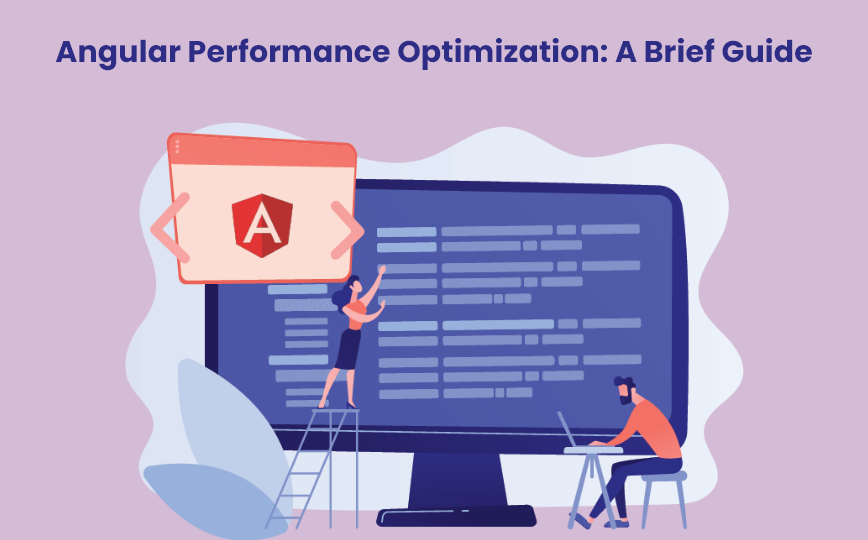